For most people, seeing a child talk to another child on the playground really doesn’t earn a second glance. I’ve come to realize over the past seven years of our journey with Autism that the smallest social interaction brings the greatest amount pride. My child normally chooses the playground equipment farthest from every other child or, better yet, runs toward the trees so that he can pick the bark. I’ve heard tales of his interactions from his teacher at school and even seen a couple of pictures of what looks like him possibly playing beside another child, but until you see something for yourself, it’s hard to believe it.

Running around in the playground.

Tuesday afternoon, Squeaker and I went to visit some new friends, venturing out to a new park with her and her daughter. Excitedly, he explored the equipment, running through it over and over again like a mouse running through an endless wheel. I helped him find the parts of the park in the perimeter that he failed to explore in his cycle, then tried to get him to socialize, as I noticed some boys playing “dinosaurs vs lizards.” Squeaker likes lizards, so why not? He showed complete disinterest. I felt a little bad that he was ignoring the little girl that we had come with, too, as she endlessly pursued him as he ran and ran…and ran. I felt better once she found some little girls to play with. Then, about ten minutes later, Squeaker ran up to the little boys and yelled, “I’m a gecko!” Their game had become aggressive and he got pushed, so he yelled, “Hey! No pushing!” Game over. Social interaction halted. He went back to manipulating all of the sensory type things they had in the park. I felt proud of his effort. 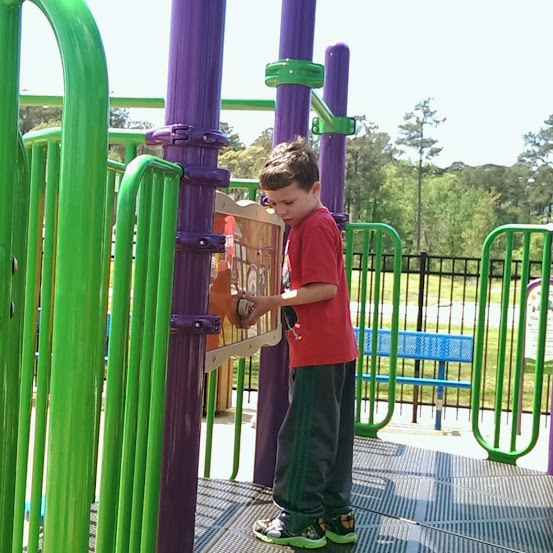 We went to finding objects in this cylinder they had and one of the kids who had also gotten tired of the dinosaur game wound up making his way toward us. Squeaker engaged him in conversation about his Ninja Turtle toy. Then, that interaction stopped later. Another little boy came up later and talked about finding a quarter on the ground and started looking for another one. Squeaker joined him in the search, and the next thing I knew, they were talking. I watched them for a while, sitting there on the ground talking. I marveled at how well social interaction went and what progress he had made. He talked about his gecko and everything. Maybe I scared his playmate off by taking a couple of pictures, but it was so worth it. My son had a real interaction with another child. Then, more children talked to him. They talked about acorns and coin collections and marbles. And maybe he over-shared a little bit by talking about how he swallowed a marble and had to get an x-ray and then said he swallowed and acorn which, to my knowledge, simply isn’t true, but whatever. Before long, he had a group of three boys around him.

If I’ve learned anything in the past couple of years, it’s that children can exceed our expectations. I’ve known many children with Autism to want friends and just not know how to interact appropriately. My son has always just been selectively standoffish until recently. I’ve dreamed for days like Tuesday to come. Watching him interact with others in a social situation and gather a following filled me with the same kind of pride that I imagine other moms must feel when they watch their children score winning goals at soccer or make touchdowns at football games or hit a home run, which is not to say that my son is not capable of making one of those accomplishments. We just haven’t made that journey yet.